From OpenWetWare
(Redirected from Beauchamp: ECogAnalysisV2)
Jump to navigationJump to search


To search for things on the wiki, use Google's site search feature. For instance, to find an Experiment Sheet, type

The eCog data analysis steps are described here. Analyzed data files for each experiment and subject can be found in /Volumes/data/lab/MUGE/

The first step is to define the "S" data structure. To do this we run generateOBJSetting.m script.

Here are the components of the S data structure:

Here are what the elements of the data structure represent:

Information about data files (i.e which experiment session is recorded under which data file) and electrode montage can be found in the physiology file of each subject. e.g. /Volumes/data/UT/YAO/YAOPhysiology.docx

Data files of each subject are found on the server: e.g. /Volumes/data/UT/YAO/eCog/

The next step is to load the appropriate data files and adjust the epochs based on the trial onset times. To do this we run the Preprocessing1.m script.

An example can be found in: /Volumes/data/lab/eCog-mfiles

This script contains the following steps:

Creates a matrix called 'traces' and saves each channel data to one row of this matrix. Audio and diode signals are saved to the last two rows of the matrix.

CAR calculates average over all channels (averages rows in 'traces' matrix) at each time point and subtracts that average from each individual channel.

'timestamp' file includes 'eventData' file. In eventData file, 4096, 4097, 4098 etc. denotes different stimuli while the following 128 or 129 denotes the behavioral response of the subject to the stimulus. For each trial we assign a number that denotes the stimulus type and response combination. Then we save these number in a separate matfile called 'imageIndex'.

Here is an example of how the audio and diode signals for a whole experimental session look like : 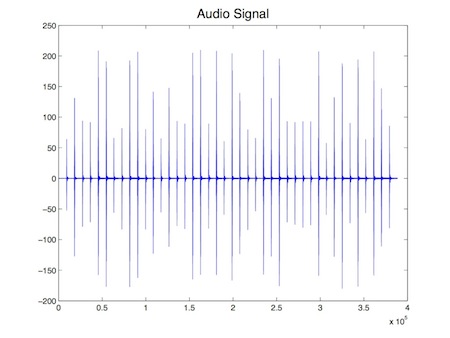 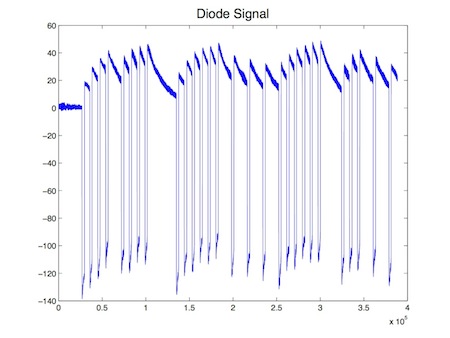 Next we run the Preprocessing2.m script. An example can be found in: /Volumes/data/lab/eCog-mfiles.

This script contains the following step:

Once we save the data in Field Trip format, then we run calculate_TFR.m script. An example can be found in: /Volumes/data/lab/eCog-mfiles.

This script contains the following step:

We calculate signal power every 10 ms at 2Hz steps between 10-200 Hz. Then we perform temporal and spectral smoothing. We use Field Trip functions to perform these analyses:

Here is an example of how a time-frequency plot looks like:

Next we run the calculate_Gamma.m script to examine neural response at gamma band frequencies. An example can be found in: /Volumes/data/lab/eCog-mfiles.

This script contains the following steps:

For each channel and time point, we average the power signal across 70-110Hz high gamma band.

Here is an example of how averaged gamma power response looks like: