From OpenWetWare
(Redirected from Absorbance Labels)
Jump to navigationJump to search

The Victor3 plate reader can measure absorbance at 600nm. Rather than attempting to measure the path length we convert absorbance to Optical Density (OD) units via calibration with our portable spec. Absorbance measurements are taken using a photometry label. There are a number of label parameters that can be varied. It was of interest to see whether measurement linearity or signal to noise ratios could be improved by changing these parameters.

Photometry labels were created using the 600nm excitation filter. Small, normal and large emission aperatures were used and the counting time was examined at both 0.1s and 0.5s.

Measurements were taken in duplicate and repeated using the portable spec. It was found that altering the counting time had no effect on either signal strength or linearity. Using a large emission aperature reduced signal to noise ratios whereas the small and normal aperatures had equivalent signal to noise ratios. The linearity for small and normal aperatures was identical, an increased counting time also had no effect.

The data shown below shows that both instruments give slightly non linear readings over the range of OD's tested. For the plate reader, data is only shown for the Normal emission aperature. Absorbance readings from the plate reader have been corrected by subtracting a media blank. Hence, these calibration curves should be independent of the media used. 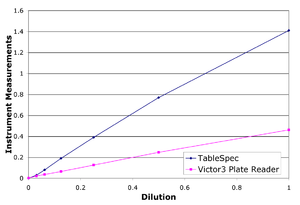 Instrument reading for a serial dilution of cell culture