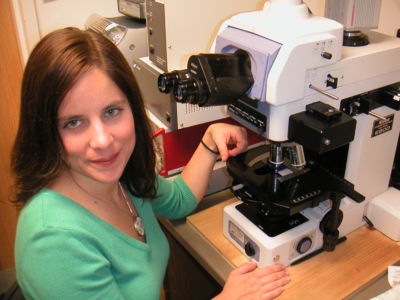 Hi. My name is Melanie Barker Berkmen.
I am a post-doc in Alan Grossman's lab at MIT.
Back to the Grossman Lab Webpage

My husband, Mehmet Berkmen, is also a microbiologist. He was a post-doc in Jon Beckwith's lab at Harvard Medical School.
http://beck2.med.harvard.edu/
Now he is at the biotech company New England Biolabs, where he is developing Escherichia coli strains and plasmids for recombinant protein production.
http://www.neb.com/nebecomm/default.asp.

Here are some of the things that I am doing when I am not in the scope room, cooking, learning Turkish, or playing with my son Kaan (born December 21, 2006). 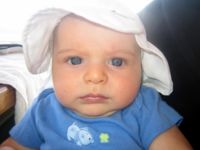 (2005-present) Question consultant for the 2005 National Biology Olympiad
for high school students in collaboration with the Center for Excellence in Education in McLean, VA http://www.cee.org/usabo/index.shtml

(Each Spring 2004-present) Volunteer assistant/instructor for the "Science Field Trip to MIT"
that involved ~90 students from four Boston area high schools and their teachers. In 2004, I helped run a lab exercise based on microscopic observation of zebrafish embryos. In 2005 and 2006, Jenny Auchtung and I designed and ran a lab exercise based on bacterial responses to starvation and stress. We had the high school students act as CSI agents and discover whether the "mysterious white powder" found in an envelope was Bacillus spores or harmless. http://www.cfkeep.org/html/snapshot.php?id=84010578

1. How do proteins come together to form a functional molecular machine, capable of complex tasks such as RNA synthesis or DNA transport?

2. How are the proteins that make up a complex molecular machine targeted to the correct location in the cell in order for them to function properly.

My interest in understanding how molecular machines function began with my graduate work on Escherichia coli RNA polymerase (RNAP). Employing biochemical, biophysical, and molecular genetic methods, I investigated the mechanistic details by which the small molecule guanosine tetraphosphate (ppGpp) acts as both a positive and negative regulator of transcription initiation in E. coli. I found that ppGpp shortens the half-lives of RNAP-promoter complexes formed on all promoters, even those promoters unaffected by ppGpp in vivo. The kinetic properties of a particular promoter determined whether or not the effect of ppGpp on half-life results in inhibition. Furthermore, I found that ppGpp stimulated amino acid promoter activity in vivo, but not in purified transcription assays. These and other data led me to propose that direct inhibition of the highly transcribed rRNA genes by ppGpp results in a dramatic increase in the free RNAP concentration, which leads to an increase in initiation from amino acid biosynthesis promoters that are rate-limited for binding RNAP. My results demonstrated that dissecting the details of the interactions between molecules (in this case, RNAP, promoter DNA, and ppGpp) could provide keys to understanding complex physiological phenomena.

My current research focus also uses B. subtilis as a model system but has shifted to exploring the function and subcellular localization of a different complex molecular machine, the Gram-positive mating pore. I have been characterizing YddE, a protein that is essential for mating of the B. subtilis conjugal element ICEBs1. yddE is encoded on ICEBs1 and is related to genes on conjugal elements in numerous bacteria, including the Gram-positive pathogens Staphylococcus aureus, Clostridium difficile, and L. monocytogenes. Containing Walker A and B box ATPase motifs, YddE belongs to a large superfamily of ATP-dependent pumps involved in the extrusion of proteins and DNA through membrane pores. Given the precedent of Gram-negative conjugation systems and given YddE’s localization, ATPase domain, and essentiality in conjugation, I propose that YddE and its homologs are the essential membrane-associated ATPase component of the Gram-positive mating pore apparatus. I plan on analyzing the role of YddE in conjugation, exploring its functional domains, investigating its subcellular localization, and identifying any YddE-interacting proteins.

Back to the Grossman Lab Webpage

Here are notes in PDF format that you can download from my lecture. I can not include everything because some of it is copyrighted:


If you would like a copy of the handout that I passed out in class OR if you have any questions about my lecture or grad school or how to get into grad school, feel free to email me at:
mberkmen@mit.edu