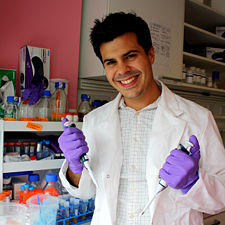 My research is focused on the development of genetically encoded molecular devices to control the expression and activity of metabolic pathways in microbes. This is made possible largely by significant advances in computational, systems and synthetic biology. I earned a BS in 2008 from the University of Virginia where I studied music, chemical engineering and biology and was mentored by Erik Fernandez (chemical engineering) and Jason Papin (biomedical engineering). I carried out my graduate research with Travis Bayer (synthetic biology) at Imperial College London, where I was a Whitaker International Fellow, and with Steve Fong at Virginia Commonwealth University (chemical engineering) where I earned my PhD in 2013. In addition to my research, I develop material for engineering and biotechnology curricula. My research interests include: