The “pelvic girdle” is made up of two hip bones, which are each made of three main parts: the ilium, the ischium, and the pubis. 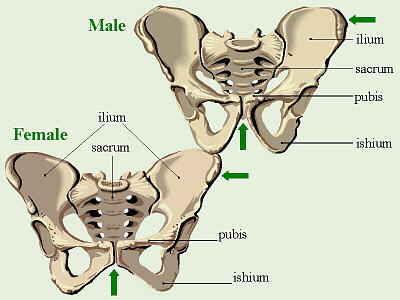 As can be seen by the figure, the upper region of the hip bone is the ilium; this section forms the sacroiliac joint. The ilium supports the sacrum on either side, which in turn supports the spine. The ishium is the bottom posterior piece of the bony hip; this is the part that humans sit on. The pubis is the bottom anterior part and the two pubic bones are connected by fibrous cartilage. This is also where the bladder rests within the human body. The large socket seen in the hip structure toward the bottom is known as the acetabulum. This socket forms the “ball and socket” joint with the femur and is a major weight-bearing joint. [1] Hip Replacement Surgery is usually either partial or total; the difference being how much of the hip is actually replaced during the surgery. For most partial surgeries, it is only the femoral head (the “ball”) that is replaced, with the acetabulum (the “socket”) remaining the same. The reasoning for partial instead of total would be more of an injury whereas total is typically needed for those with severe arthritis. [2] When looking at Total Hip Replacement Surgery there are two main types, cemented and cementless. Cemented replacements most commonly use polymethylmethacrylate as the cement and patients with such surgeries can usually move well soon after the surgery. The only issue with cemented replacements is if the cement fails and the prosthesis loosens or the bond between the cement and the bone breaks. Even so, this is generally a very reliable method. Cementless replacements are those which are directly attached to the bone without the need of cement. The surface of such implants are said to be “conductive to attracting new bone growth”. The main issue with this type of replacement is the need for very high precision in order for the bone to actually grow onto the implant. Due to this, motion directly following the procedure is usually assisted in order to allow the bone time to grow a connection with the implant. This type of implant is still being developed, but for most cases it is used in younger patients who tend to be more active and have better overall bone quality. [2]

In 1891, Professor Themistocles Glück developed one of the first hip implants, making the ball-and-socket joint out of ivory. This implant was then fixed to the bone of the patient using nickel-plated screws [3]

In 1940, Dr. Austin Moore inserted a metal replacement for a large portion of a patient’s femur that had been damaged from a “recurrent giant cell tumor”. This prosthesis was made of a Vitallium, which is a cobalt, chromium, and molybdenum alloy and is lightweight and durable. [3][4]

The first total hip replacement was successfully implemented by Sir John Charnley during the 1960’s. The socket component of the hip structure was made of Teflon, with the femur ball component being made of stainless steel. Even though the Teflon component was found to be ineffective as a prosthesis material, the form of Charnley’s prosthesis became the standard for such implants, and even today is used with some variation. [5]

The hip is a major weight-bearing piece of the human body and therefore, any complications with it must be seriously dealt with. Any replacements for the hip must be very sturdy, but also flexible enough to allow the day to day movement and stress the hip goes through without causing constant pain to the patient. 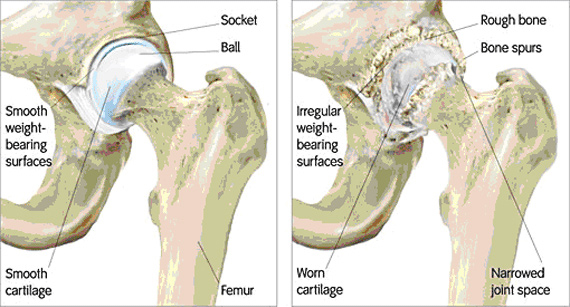 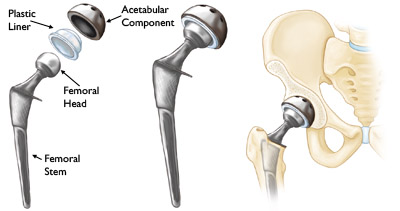 The total hip replacement implant is made up of the parts seen in the accompanying image. The acetabular shell is inserted as the “socket” part of the joint. Next, a liner (polyethylene in the shown case) is added as a cushion similar to cartilage present in a healthy joint. The stem part of the implant is inserted into the femur and the femoral head is attached to it making the “ball” portion of the joint. Once completely assembled, the implant is tested to be sure that it allows as much movement as healthy joints would.

The standard hip replacement surgery follows a number of steps in order to properly fit a working prosthesis. The first step is to make an incision through the skin, tissue, and muscle layers over the hip joint. The leg is then rotated to dislocate the femoral head, this is then removed using a bone saw. Once this occurs, the acetabulum will be accessible to the surgeon, who will use a reamer to properly shape a new socket for the acetabular shell to be placed. The acetabular shell is then implanted and held in place using a variety of methods including a bone cement. An insert is then added to the cup, typically made of a ceramic or a plastic, this will be in contact with the new femoral head once fully assembled. The femur will then be exposed using a type of level to slightly lift it. The surgeon will then use tools such as an osteotome and a rasp in order to allow the stem of the implant to be inserted into the canal of the femur. Before adding the stem, the surgeon will typically remove any osteophytes remaining around the hip socket. Osteophytes, or bone spurs, are small bone growths that occur due to overcompensation of stressed joints. The femoral stem is then implanted and a “trial ball” is placed on it, this will be used to test the range of motion of the hip and ensure that the joint will be stable. The final femoral head ball is put onto the stem in place of the test ball; the leg is tested again for motion and stability, as well as tested to see if the length of the leg remains unchanged. Finally, the surgeon will close the opening and seal the wound with stitches and staples. [7][8] 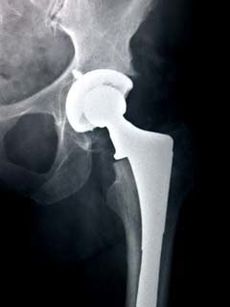 Minimally Invasive Hip Replacement Surgery follows a similar procedure to that of the standard surgery. The major difference between them is that for the minimally invasive surgery, the incision made is much smaller, only about 3-4 inches long. The smaller incision results in less recovery time needed after the surgery as well as less of a risk of damaging any tissues, nerves, or muscles that are commonly worked around during the standard surgery. [9]

Some complications are possible following the implanting of a replacement hip. The earliest complication is dislocation where the new ball comes out of the socket. This is typically uncommon and can usually be remedied by a reduction of the hip. Only if it continues to occur would further surgery be necessary. [10] 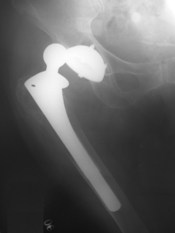 The most common complication associated with the surgery is blood clots. Blood clots can potentially cause death if untreated, but in most cases a program will be set post-surgery to keep clots from forming. [10]

Another complication is infection, this can occur in the wound and it is typically treated simply with antibiotics. Even so, the infection could spread to the implant, which would require further surgery and the possible removal of the prosthesis. [10]

Over time, there may also be wearing or loosening of the prosthesis, if this becomes painful, a second “revision” surgery may be needed. In some cases, patients will experience a difference in leg length after their surgery. Although it is common practice to try and keep leg length constant, there may be a need to alter it in order to keep the prosthesis stabilized. Those who do find this complication uncomfortable have remedied it using a simple shoe lift. [10]