Difference between revisions of "CH391L/S13/QuorumSensing"

Quorum sensing is a system used by bacteria to detect population density and respond. This communication is carried out by molecular signals produced and released by the bacteria. The signals disperse to nearby individuals and eventually lead to a pathway that causes induction of more signal production in those neighbors, in addition to other desired genes[1]. The more dense the population, the higher concentration the signal is. This circuit creates a positive feedback loop that causes the population to work in sync. In nature, bacteria can use quorum sensing for functions such as bioluminescence[2], virulence[3], and biofilm formation[4]. Because quorum sensing is such an important aspect of biofilm formation, it is a valuable topic of research for disease prevention and treatment. In addition, QS has various applications in synthetic biology since QS systems can be engineered to accomplish useful tasks. 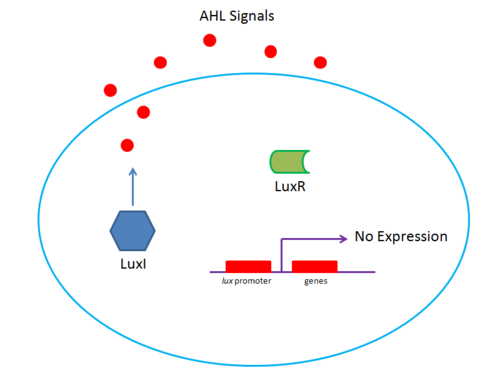 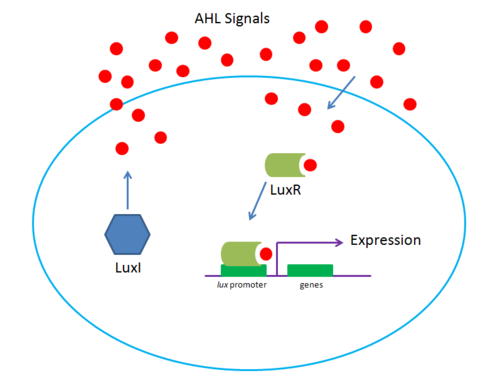 V. fischeri is a classic example of gram negative bacterial quorum sensing[5]. The system uses two regulator proteins that have analogies in other QS systems, LuxI and LuxR. LuxI is a protein that synthesizes the signal, N-(3-oxohexanoyl)-homoserinelactone (HSL), called the autoinducer. The autoinducer then diffuses out of the original sender and into neighboring cells. If V. fischeri density is low, there is a low HSL concentration. Similarly, at high densities, there is high HSL concentration. At a particular threshold concentration, HSL will bind to and activate LuxR, a protein which activates transcription of a set of genes that include bioluminescence and luxI. luxI transcription leads to further production of LuxI, creating a positive feedback loop that creates rapid light generation. However, since LuxR negatively regulates luxR, light production is eventually stopped.

P. aeruginosa uses a system similar to LuxI/LuxR[6]. lasI encodes LasI, which catalyzes formation of a HSL autoinducer(3-oxo-C12-HSL)[7]. 3-oxo-C12-HSL binds to LasR, which regulates a set of genes that include a second QS system, RhlI and RhlR[8]. Because RhlI and RhlR production results from LasR stimulation, it is thought that the two systems are sequential. In addition, 2-heptyl-3-hydroxy-4-quinolone (PQS) is thought to connect the two systems[9]. Both Las and Rhl system regulate various virulence genes important for infection. 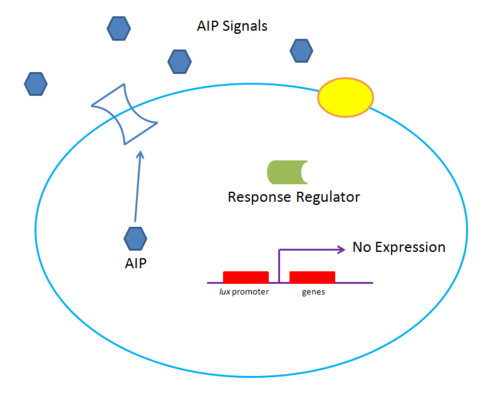 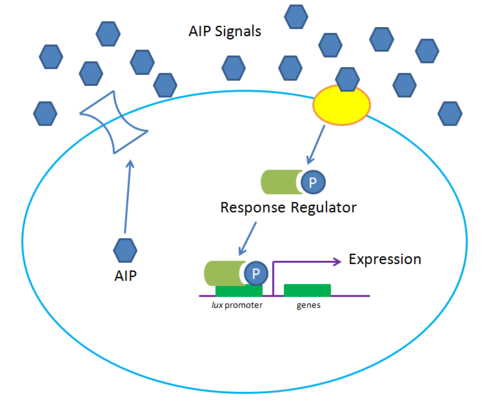 Gram positive quorum sensing systems differ from gram negative systems in their autoinducer molecules and how signals are received. Instead of HSL based signals, a peptide is used (called an autoinducing peptide, AIP). These signals cannot diffuse freely like HSL can and are instead transported through ATP-binding protein exporters[10]. In addition, the signal does not directly bind with a transcriptional activator. Instead, it binds to a receptor on the surface of the receiver’s membrane that uses a phosphorylation based relay system to eventually regulate gene expression. Quorum sensing in S. pneumonia is typical of gram positive bacteria. comAB encodes for AIP export genes, comC encodes for the AIP, comD encodes for response receptor, and comE encodes for the transcriptional regulator. 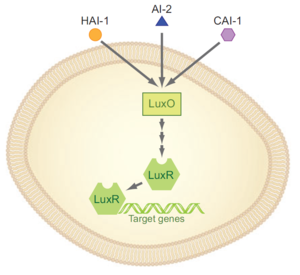 Many bacteria have multiple QS systems, as seen with P. aeruginosa. Although autoinducer are usually specific to their receptor, there is sometimes nonspecific signaling or cross-talk between these systems. For example, there is interaction in cystic fibrosis patients between P. aeruginosa and B. cepacia[11]. B. cepacia can recognize the HSL signals produced by P. aeruginosa to activate its cep QS system, but P. aeruginosa cannot recognize any of B. cepacia’s signals. This is important for understanding cystic fibrosis development since B. cepacia colonizes only after P. aeruginosa is already established. This suggests that quorum sensing is vital for the development of multispecies communities. Multispecies communication can also be specific. luxS, used to synthesize autoinducer-2 (AI-2), has been found in over 55 species of bacteria[12] and has been found to regulate biofilm development.

It is not necessary for QS systems to function independently. As seen with P. aeruginosa, the Las and Rhl systems are temporally related. Another example is in V. harveyi, in which 3 different signals are used to optimally allow the bacteria to respond depending on the environment. The 3 pathways initially function in parallel, but eventually converge to activate the same result, luminescence[13]. 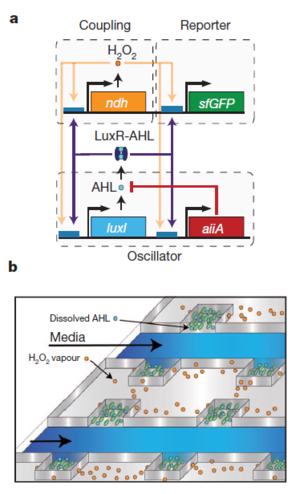 A. The LuxI/AiiA system that produces the H2O2 oscillations. Peach and Purple arrows represent activation of the promoters, while the red lines represents repression. LuxI and AiiA are responsible for AHL oscillations, ndh leads to production of H2O2, and sfGFP produces the reporter. B. Conceptual design of the microfluidic arrow[14].

While quorum sensing is a robust system in the highly variable cellular environment, it is limited by the rate of diffusion and thus is a slow process that constrains the physical size of the system. Communication can also be achieved through gas phase signals, which are relatively faster than diffusion through liquid media, but also are weaker and short lived. Prindle et al. have combined these two signaling methods in order to create "biopixels", a large scale, yet robust quorum sensing system[14].

Since quorum sensing is effective on a small scale, they used a LuxI/AiiA system to produce the autoinducer acyl-homoserine lactone for intracolony communication. These colonies are then linked together by H2O2 gas communication through the addition of NADH dehydrogenase II (ndh), which produces H2O2, under the control of a lux promoter. H2O2 signal is received by a native control system that deactivates ArcAB, which is a repressor for lux. They were able to generate synchronization over a distance of 5mm, or 2.5 million cells. 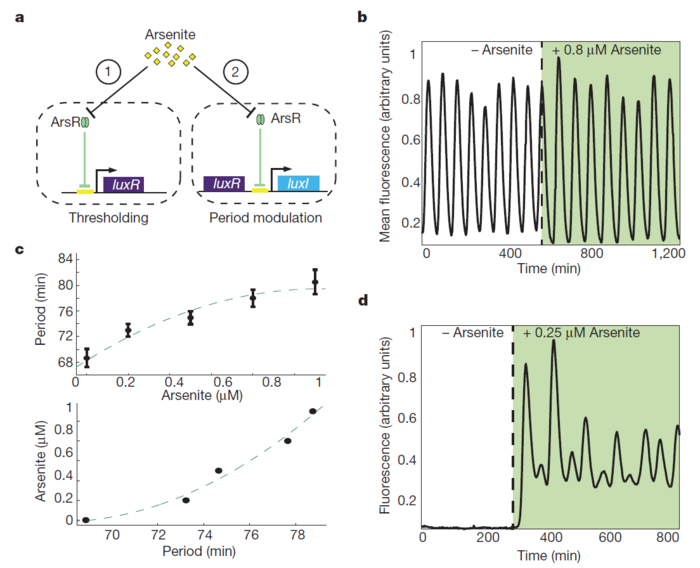 They added an additional copy of LuxI under the control of an arsenite-responsive promoter that is repressed in the absence of arsenite. When there is no arsenite, the system generates baseline oscillations. With arsenite, the additional LuxI promoter becomes active and increases the amplitude and period of oscillation. They found this system to be very sensitive and able to reliably sense concentrations of arsenite as low as 0.2 μM (WHO recommends 0.5 μM for developing nations).

They also created an alternate system where luxR was completely removed except from a single arsenite sensitive promoter. This "threshold" system produced no oscillations until an adequate amount of arsenic (minimum 0.25 μM) was added.

This team was able to create a test strip that can quantify the concentration of mercury. The test strip has an IPTG gradient on it. When a sample of water is placed on the strip, the bacteria on them will either become "senders" or "receivers". When there is more mercury than IPTG, the senders release a signal that induces expression of red dye in nearby receivers. This creates a small red line on the strip corresponding to mercury concentration.