Difference between revisions of "CH391L/S13/Metagenomics & Bioprospecting"

Of these somewhat fraternal concepts, bioprospecting could be considered the older sibling. Bioprospecting derives from the field of chemical ecology wherein the discovery and commercialization of natural products was previously known as 'chemical prospecting.' While similar in principle, chemical prospecting ultimately employed chemical synthesis of newly discovered, commercially relevant compounds. The recent advent of next-generation sequencing, recombinant DNA techniques, and the field of biotechnology in general allowed the development of bioprospecting as a unique concept. Those same technological advances and an interest in natural products would also lead to metagenomics.

Bioprospecting: Hunting for Utility in Nature

Bioprospecting covers the many activities involved in discovery and utilization of biological material. In the past, bioprospecting primarily focused upon natural products and drug discovery. Still, bioprospecting has led to the discovery of numerous enzyme and protein tools widely used in the pharmaceutical and research communities. Current research efforts along with improvements in sequencing technologies may expand the breadth of activities that constitute bioprospecting. 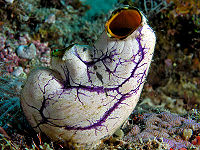 As expected, there are many examples of bioprospecting for the purpose of drug discovery. As an outgrowth from chemical prospecting, considerable bioprospecting efforts - both past and present - have focused on plant secondary metabolites. One potent chemotherapy drug, paclitaxel (i.e. taxol) serves as an excellent example of this transition from chemical prospecting to bioprospecting. The isoprenoid compound now know as paclitaxel was discovered in the bark of the Pacific Yew tree. Before the adoption of semi-synthetic production in 1988, therapeutic paclitaxel production relied upon low yield chemical extraction [1]. Using metabolic engineering techniques, researchers created transgenic Arabidopsis thaliana capable of producing taxidene, the first committed step in paclitaxel biosynthesis [2]. Since then, additional research led to production via plant cell fermentation. More recently, researchers engineered strains of E. coli and yeast with the capacity to produce taxidene and other isoprenoid compounds [1][3]. This was accomplished following the introduction of isoprenoid biosynthesis pathways. The tale of paclitaxel is principally considered a feat in the field of metabolic engineering. Still, those engineered strains of E. coli and yeast serve as platform technologies for tractable expression of other newly discovered enzymes.

Although terrestrial plants remain an important aspect of bioprospecting, increasing attention is being paid to marine biodiversity in the search for new therapies. Study of tunicated has led to the discovery of numerous cytotoxic compounds with potential anticancer properties [4]. Commonly known as seaweed, macroalgae offer another opportunity for bioprospecting [5].

Regarding second-generation or advanced biofuels, bioprospecting techniques are becoming an increasingly important strategy for biochemical pathway engineering and overall optimization. In a 2010 publication, LS9, Inc. reported the discovery of alkane biosynthesis pathways in a diverse set of cyanobacteria. Those enzymes were subsequently expressed in E. coli for the production of higher-value biofuel products [6]. That body of work provides an excellent demonstration of various bioprospecting techniques.

Fluorescent proteins are likely one of the most famous research tools derived from bioprospecting. Examples include dsRed as well as GFP and its many derivatives, which have been utilized throughout biological research. Interestingly, these fluorescent proteins are finding new purpose in medicine as visual guides during surgery. Before tumorectomy, a mouse with internal tumors is injected with a recombinant form of GFP, which is targeted to and accumulates on the cells of blood vessels. During surgical removal of the tumor, the introduced GFP provides a surgeon with a strong visual queue of nearby blood vessels greatly reducing the risk of blood vessel lacerations.

DNA and RNA polymerases are the workhorses of modern biotechnology. Almost every aspect of modern biological research depends upon nucleic acid polymerases in one way or another. Recombinant cloning techniques, Sanger sequencing, and qPCR cover a few of the most common uses. These examples also highlight the shared importance of nucleic acid polymerases and Polymerase Chain Reaction (PCR). It was the development of PCR using Taq polymerase that began the drive for bioprospecting of DNA and RNA polymerases. Over the years, several other polymerases of thermophilic origin have been discovered and rapidly commercialized. One area of considerable interest is the discovery or development of high-fidelity, thermostable reverse transcriptases.

Consideration of biological organization greatly assists understanding the meaning of metagenomics. Within that conceptual framework, metagenomics would be a higher level element similar to the population or community tiers of biological organization. In brief, metagenomics refers to the sum of all genetic information present in an environmental sample. The term itself was coined in 1998 [7]. Shortly thereafter, researchers characterized the first bacterial rhodopsin protein, which was isolated from seawater genomic DNA fragments [8].

The Benefit and Cost of Pyrosequencing Technology 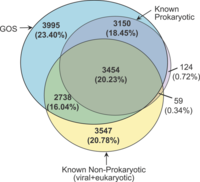 Since the turn of the century, metagenomics has bosomed as a field. Decreasing per basepair cost of pyrosequencing technologies has greatly increased the number of metagenomic research projects. The April 2012 release of the UniProt database comprised an impressive 20.6 million protein sequences. However, only 2.8% of those protein sequences were confirmed to exist by analysis at the protein and or transcript level. The matter is further complicated as the probability of feature identification is proportional to read length. So, there is a significant difference between the information derived from pyrosequencesing reads versus Sanger sequences [9].

In the early 2000's, the J. Craig Venter Institute set as one of its goals to sequence the genomic diversity in the oceans. Craig Venter used his personal yacht, the Sorcerer II, to traverse the Earth's oceans, taking samples of oceanic life and sequencing using Whole Genome Shotgun Sequencing. From this adventure, they uncovered 6 million proteins (double the current database), which consisted of 1,700 clusters of gene families with no known homology. The data also revealed homology for 6,000 unknown ORF families (ORFan). They found that a very high proportion of new genes belonged to viruses (likely marine phage), which current databases had underrepresented. [10]

Targeted metagenomics is a useful combination of bioprospecting and metagenomics. This technique can be used to identify novel genes by screening ORFs derived from a metagenomic library. It is possible to conduct an initial screen computationally by first parsing identified ORFs for a desired homology. Following cloning, a functional screen is used to identify and recovery desired genes from the metagenomic library. Targeted metagenomic screens have led to the discover of new antibiotic resistance genes, cold-adaptive rRNAs, and cellulose degrading enzymes [11].

Plant polysaccharides such as cellulose are not broken down with enyzmes found in mammals, but species such as Ruminents (cows) carry symbiotic bacteria that perform this job. These microbes cannot be cultured in lab. However, acquisition of the enzymes used to break down cellulose could be used to generate biofuel from easily grown plants like grass. Here, Mattias Hess and colleagues used Metagenomic analysis to identify 51 enzymes active in breaking down polysaccharides [12]. The authors isolated microbes from a nylon bag filled with switchgrass placed inside a fistula created into a cow's rumen. Various Next-Gen Sequencing technologies were used to generate 268 Giga-basepairs of sequences. From the various organisms, they predicted 27,755 putative polysaccharide enyzymes, of which 43% had less than 50% similarity to any known sequence. The authors expressed and tested 90 of these genes based on similarity to glycosyl hyrdolase domains, which identified 51 active enzymes. The enyzmes were active against various substrates used as biofuel crops. Finally, the authors generated 15 draft genomes of new microbial species. A number of earlier studies have also attempted to identify glycosyl hydrolases in species such as termites and panda [13][11]

Bioremediation of uranium waste is an important industrial process. Here, the authors used a proteomics based approach to identify proteins in iron-reducing (FeIII) microbial species used in the reduction of soluble uranium to insoluble uranium [14]. Although the study here does identify new genes, it identifies new metabolic pathways. The authors started with 3 known Geobacter species stimulated with acetate and used in a bioremediation project and used the known proteins as a reference for performming 2D liquid chromatography tandem mass spectrometry. They identified over 13,000 peptides and 2,500 proteins. Not surprisingly, the authors show that acetate utilization increases via the TCA cycles (acetyl-CoA enzymes) presumably for increased growth as a fuel source. They also note high abundances of pyruvate ferrodoxin oxidoreductase, suggesting the bacteria are undergoing high carbon fixation processes.

For a review on methods of constructing metagenomic libraries to screen for useful genes as well as other useful genes isolated from the metagenome, see [15].

In a 2007 Nature article, researchers outlined the logistics of and rationale for amassing a human-microbe metagenome. Those authors described a human as a conglomerate of both human and microbial cells. Accordingly, they went on to postulate that this project would lead to an understanding of an individual's micro-evolution, that human's health, and disease predisposition. The author's further postulated that the resulting database would deepen the understanding of diagnostic biomarkers while having potential ramifications in industry through novel enzyme discovery [16].

Development of metagenomic techniques and protocols has also stimulated the field of virology. Viral metagenomic studies have led to the discovery of many previously unknown viruses. These endeavors have generated a vast amount of viral sequences for which the majority of sequences are reported as unknown [17]. It is worth noting that viral metagenomics has its own unique difficulties. Some viruses employ modified nucleotides as one part of their infection strategy. Additionally, many viruses employ lytic genes that could kill bacteria used during routine cloning. These and other factors necessitate techniques such as LASLs or link-amplified shotgun libraries [18].