Difference between revisions of "CH391L/S13/In vitro Selection of FNAs" 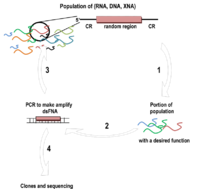