The genetic code for the translation of RNA into protein is one of the most ancient and universal innovations in the evolution of life on earth. Nearly all life forms use the same redundant code for the incorporation of the 20 canonical amino acids into proteins. In two unique exceptions, selenocysteine and pyrrolysine, stop codons have been retooled to code for a 21st amino acid. [1][2] Expansion of the genetic code to include noncanonical, or unnatural amino acids (UAAs) holds promise for improving and diversifying protein function, generating proteins that normally would require postranslational modification, and the study of the genetic code itself. Technology for the creation of proteins bearing UAAs has progressed steadily over the last ~30 years, including both in vitro and in vivo methods.

Schematic presentation of the principles of solid-phase peptide synthesis[3]

A method of native chemical ligation

Solid-phase peptide synthesis (SPPS) was developed by Bruce Merrifield in the early '60s, for which he received the Nobel Prize in 1984. In this method, the C-terminal amino acid is anchored via a linker to an insoluble support. Both the N-terminus and the side-chain are protected from reaction. The N-terminus is typically protected by Boc or Fmoc groups, and the side-chains can be protected by a variety of groups. In the first step, the N-terminus is deprotected. The next desired amino acid in the chain is added to the column. This process of deprotection and addition is repeated until the chains is completed. The side-chains are then deprotected, and the completed peptide is eluted from the column. This method is useful for producing peptides of up to ~50 amino acids, and noncanonical amino acids may be readily incorporated.

Native chemical ligation is used to produce larger peptides and full proteins. This method requires uniquely reactive functionalities incorporated into each peptide at the N- and C-terminus, and allows the use of unprotected peptide segments. In one method of native chemical ligation, the thiolate group of an N-terminal cysteine residue peptide attacks the C-terminal thioester of a second unprotected peptide. This reversible transthioesterification step is chemoselective and regioselective and leads to form a thioester intermediate. This intermediate rearranges irreversibly by an intramolecular S,N-acyl shift that results in the formation of a native peptide bond at the ligation site. This method may be repeated to make long peptides and proteins.[4]

Proteins with unnatural amino acids may also be produced biosynthetically. In this technique, truncated tRNAs are enzymatically ligated to chemically aminoacylated nucleotides, effectively decoupling the identity of the tRNA from that of the attached amino acid.[5] One can then use a cell-free translation system to synthesize proteins with unnatural amino acids incorporated at the codon complementary to the tRNA used - typically an unused stop codon like Amber (UAG). [6] The protein may then be isolated and its properties analyzed. 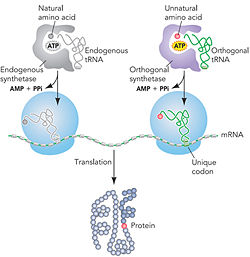