Difference between revisions of "CH391L/S12/Locomotion" 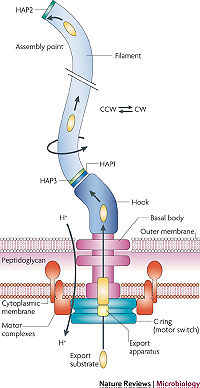 The bacterial flagellum is the most common and thoroughly studied prokaryotic motility structure. It resembles a spinning propeller-like structure that is used for swimming in aqueous environments and in some organisms enables swarming across solid surfaces. The flagellum is a very complex organelle consisting of over 20 proteins (flg, flh, fli, flj variants) and as many as 30 proteins assisting in regulation and assembly. Each Escherichia coli or Salmonella cell typically has 6-8 structures. The export system for assembly of the filament structure represents a flagellum-specific Type III secretion system (T3SS) in which flagellin subunits are passaged through the hollow flagellar filament structure to the distal end for assembly. The main structure consists of 3 main substructures: the basal body, which anchors the structure in the cell membrane and contains the motor; the filament which acts as the propeller; and the hook, a joint which connects the basal body and filament. Rotation of the filament to generate movement is driven by the proton motive force, whereby H+ atoms crossing the cell membrane interact with the motor proteins (MotA, MotB), inducing a conformational change that turns the rotor. This rotation can reach speeds of 18,000rpm and propel the cell 25-35uM per second.

The rotation of the flagellum and the direction of movement is often regulated by sensory stimuli, allowing the cell to migrate towards attractive signals. In E.coli this is achieved through a signal transduction system that controls the phosphorylation state of the response regulator protein CheY. In the absence CheY-P the flagellum rotates CWW in a "run" state. The presence of CheY-P, induces a switch to CW rotation resulting in "tumbling" which randomly reorients the cell. When an attractant binds to a receptor it initiates a conformational change and downstream cascade that leads to suppression of CheA, a protein that normally phosphoryates CheY to CheY-P. The absence of CheY-P causes the flagellum to remain in the "run" state leading to migration towards the signal. A third protein, CheZ helps regulate the circuit by preventing the accumulation of CheY-P through dephosphorylation.

The 2009 Imperial College of London igem team attempted to engineer e.coli chemotaxis towards malate so that cells would migrate towards plant roots (which excrete malate). The e.coli cells could then be taken up by the plant and used for food. To do this they introduced a malate chemoreceptor from Pseudomonas aeruginosa and demonstrated that cells tended to be in the run state more often when exposed to malate 2009 Team Auxin. 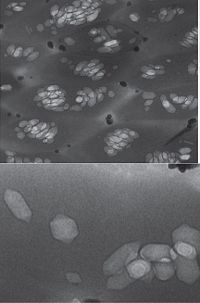 Some aquatic bacteria use hollow gas-filled vesicles to provide buoyancy and enable them regulate their position in the water column. Prototrophic bacteria may use the vesicles to find regions with appropriate light intensity[4], similarly aearobic bacteria may use them to float to oxygenated surface waters[5] . Gas vesicles are commonly observed and studied in aquatic cyanobacteria, but have recently been discovered in Serratia sp., an enterobacterium [3]. Typically 10-14 gvp genes are involved in formation of the hollow, gas-filled cylindrical structures with conical caps. It has been shown that gas vesicles from Anabaena are permeable to H2, N2, 02, C02, CO, CH4, and Ar [6].

The 2009 Groningen igem team cloned the gas vesicle operon from Bacillus megaterium and put it under the control of an Arsenite sensitive promoter. In the presence of Arsenite the cells will make gas vesicles and become buoyant Groningen 2009. 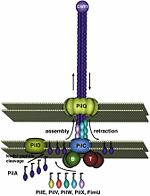 Many species of bacteria including Pseudomonas aeruginosa,Neisseria gonorrhoeae and Myxoccocus xanthus use a Type IV pilus (T4P) system for motility. Cell propulsion by T4P involves pilus extension, attachment, and then pilus retraction. This process results in a jerky pattern of movement, hence the name "Twitching motility". Cells move at rates of 0.05 - 1 uM per second and close proximity to other cells is usually required for efficient movement. The process of pilus extension and retraction involves the ATP-dependent assembly or disassembly of PilA monomers in the pilus fiber. 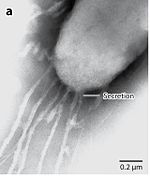 Many diverse bacterial species have been to observed to be motile on a solid surface without the aid of a flagella or pilus. Major progress in explaining this "gliding" mechanism as exemplified by Myxococcus xanthus has only recently been made. 2 models help explain the gliding movement, the slime secretion model and the focal adhesion model. Both models likely play a role in this form of locomotion and appear to be powered by the proton motive force.

It has been observed that most gliding bacteria tend to leave behind a trail of polysaccharide "slime" as they travel. It has been hypothesized that the extrusion of this slime could provide force to push the cells forward. Nozzle structures have been observed by electron microscopy at the cell poles with ribbons of slime exiting the structures. However, the exact role of slime secretion in gliding motility is still a topic of much debate and speculation.