Today is a day when you'll start to collect information about the mutant candidates you've chosen. In particular, you will look at

The kinds of readouts will be independent of the kind of mutant you've decided to isolate, and the data should be informative, though preliminary. 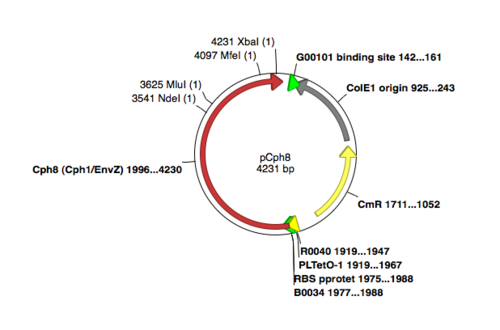 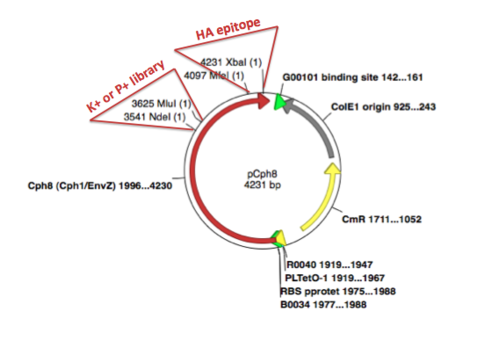 A map of the plasmid that encodes the light-sensor protein, Cph8, is shown. To make the libraries that we used last time, the plasmid was modified in two ways.

The resulting pool of plasmids, as shown on the modified plasmid map, is what you transformed and screened last time.

The mutant phenotypes you're following might be explained by changes in kinasing or phosphatasing activity of Cph8. They could also be explained by changes in protein expression. For example, if the protein's not made, then it cannot kinase OmpR, resulting in a P+ phenotype. Thus it's important to show that the protein still exists in the cell (at a minimum) and that its expression is about the same as the wild type protein (ideally). With a Western analysis, you will compare the expression levels of the wild type and mutant proteins, detecting the various Cph8 versions by detecting the HA-epitope tag that's been fused to the C-terminus of the gene.

There are some important differences in protein and DNA gel electrophoresis. One thing you’ll notice right away is that the gel itself is different. DNA molecules are typically separated thorough an agarose matrix whereas acrylamide is used for proteins. Both are porous sieves that retard molecules based on their length, with smaller molecules moving through the matrix faster than longer molecules. Agarose gels are run horizontally and acrylamide gels are set in the tank vertically but gravity has nothing to do with either separation. Electrical poles draw the charged molecules through the matrix. Unlike DNA, proteins do not have a uniform charge so before electrophoresis they are coated with a charged molecule (called SDS) to add negative charge proportional to their length. You could expect proteins of identical length but folded into different shapes to separate differently (not the desired outcome) so proteins are also unfolded before they are loaded on a protein gel. This is done by boiling them in the presence of a reducing agent, breaking disulfide bridges and denaturing the protein. The last notable difference in DNA and protein electrophoresis is the visualization techniques used to find the molecules once they’ve passed through the gel. Recall that DNA was visualized with Ethidium Bromide, an intercalating dye that changes its fluorescence when bound to DNA. Proteins can be detected with Coomassie stain, which detects abundant proteins in the gel, turning them blue. Other more sensitive techniques are available for staining protein gels (for example silver stain). Finally, a Western blot can be used, as you will today, to transfer the proteins from the gel to a membrane that is later probed with an antibody specific to the protein of interest. In our case we will use the 12CA5 antibody to detect the HA-epitope on Cph8.

Though you don't know for certain which, if either, of your mutants exhibits detectably different activity in the context of the bacterial photography system, you will send plasmid DNA from both mutants for sequencing. The invention of automated sequencing machines has made sequence determination a fast and inexpensive endeavor. The method for sequencing DNA is not new but automation of the process is recent, developed in conjunction with the massive genome sequencing efforts of the 1990s. At the heart of sequencing reactions is chemistry worked out by Fred Sanger in the 1970’s which uses dideoxynucleotides.

These chain-terminating bases can be added to a growing chain of DNA but cannot be further extended. Performing four reactions, each with a different chain-terminating base, generates fragments of different lengths ending at G, A, T, or C. The fragments, once separated by size, reflect the DNA’s sequence. In the “old days” (all of 15 years ago!) radioactive material was incorporated into the elongating DNA fragments so they could be visualized on X-ray film (image on left). More recently fluorescent dyes, one color linked to each dideoxy-base, have been used instead. The four colored fragments can be passed through capillaries to a computer that can read the output and trace the color intensities detected (image on right). Your sample will be sequenced in this way on an ABI 3730 DNA Analyzer.

Today is a busy day! In addition to running your protein gel and blotting the proteins to a nitrocellulose membrane, you will also isolate plasmid DNA from the cells to send for sequencing. Finally you'll set up new cultures of your mutants in the light and the dark so that you can measure the β-gal activity associated with the samples next time.

Each group will run a lane of molecular weight markers, a lane with a positive control for the Western (e.g. an HA+ control lysate), a lane with the HA-tagged, wild type light sensor, and two lanes with HA-tagged mutants from your library screen. Two teams will share one gel.

10. Once all the samples are loaded, turn on the power and run the gel at 200 V. The molecular weight standards are pre-stained and will separate as the gel runs. The gel should take approximately one hour to run. During that hour, you should work on part two of today's protocol.
11. Wearing gloves, disassemble the electrophoresis chamber.
12. Blot the gel to nitrocellulose as follows:

13. Two blots can be run in each tank. When both are in place, insert the ice compartment into the tank. Fill the tank with buffer. Be sure the stir bar is able to circulate the buffer. Connect the power supply and transfer at 100 V for one hour. You can use this time to complete part 2 of today's protocol.
14. After an hour, turn off the current, disconnect the tank from the power supply and remove the holders. Retrieve the nitrocellulose filter and confirm that the pre-stained markers have transferred from the gel to the blot. Move the blot to blocking buffer (TBS-T +5% milk) and store it in the refrigerator until next time.

While your protein gel is running and blotting, you can isolate plasmid DNA from the remainder of the overnight cultures of the 2 mutant candidates. The miniprep protocol we'll follow is already familiar to you from Module 1. Each sequencing reactions requires 200-500 ng of plasmid DNA, and 3.2 pmoles of sequencing primer in a final volume of 12 μl.

You will set up overnight cultures for your samples in the light and dark to assess the β-gal activity associated with your mutants. Review the protocol that was presented earlier in this module for details and ask the teaching faculty if you need help. 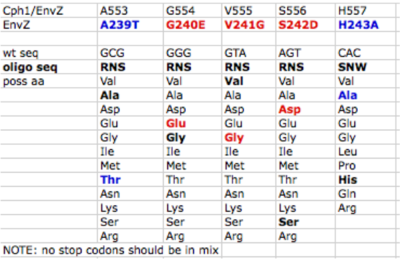